This lesson plan guides students to analyze the role of music in war. Students will investigate the lyrics of original Civil War songs and listen to audio clips.

1. Identify the reasons why each side claimed they were fighting.
2. Describe the feelings of soldiers during war time including camp life and battle.
3. Understand that many songs had the same tune but that the lyrics were adapted to present a particular message.
4. Identify both similar and different viewpoints during the war (i.e. Union soldiers, Confederate soldiers, Union home front, Confederate home front, African Americans)
5. Describe different perspectives and attitudes throughout the course of the war, from patriotism in the beginning, to the sadness and destruction throughout the war, and feelings of hope near the end.

Introduction: Music has always been a way for Americans to express themselves in ways that simple words could not. During the Civil War, Americans on both sides used songs to communicate their feelings and ideas about the war. As the war changed, so did attitudes and perspectives, and as a consequence, songs also changed. In this activity your students will discover how the rousing Battle Cry of Freedom song, which both sides adopted, demonstrated the differing viewpoints about the war among different groups of people. Lastly, your students will begin to appreciate the complexities of the Civil War through music. Too often we see the war through the eyes of photographs— photographs that are still and quiet. While the war was a time of death and tragedy, Americans on both sides used music to depict the war in ways words or pictures could not. Music was yet another way that soldiers could take their minds off of their troubles. Music from the Civil War also helped increase morale and understanding of the events of the time period for both the Union and the Confederacy.

Getting Ready to Learn
Begin with a discussion of music’s role in war. Ask students if they know of any songs that spark patriotism (Lee Greenwood’s God Bless the USA). Use the lesson introduction and guiding questions. Explain the theme: music is a form of self-expression, different groups used music to express themselves during the Civil War, and music can provide a way to understand the culture during this time.
Lesson:
1. The United States was bitterly divided during the Civil War. Many people had different views about the war and why they were fighting. Each group tailored music to express their views. The groups that will be discussed in this lesson are Union soldiers and Confederate soldiers.
2. Keep these groups in mind as students answer questions about their songs. Write these groups on the board.
3. Groups will read the lyrics and determine which perspective each song portrays best.
4. Distribute the “Investigating Song Lyrics” sheets.
5. Have students read the lyrics of both songs quietly. Then allow them to discuss each song using the questionnaire, comparing and contrasting their similarities
6. Allow students about 10-15 minutes to complete their questionnaires.
7. Introduce the fact that each song expresses a particular viewpoint of people during this time. The class as a whole will attempt to figure out what the song’s message is and why it was a popular song during the Civil War.
8. Students should identify ways in which these songs expressed their reason for fighting the Civil War. How did music change throughout the war? What were some similarities between different groups? What were some differences? 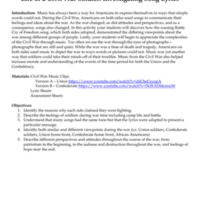