In this lesson plan students will write a brief news story to accompany the featured photograph.

Introduction: The headlines and stories surrounding the images will differ greatly, due to the agenda of the press. The single most significant tool used to fight in the Civil War was man power. Constant requests for volunteer soldiers were seen in newspaper articles for both the North and South.

1. Student will choose a headline page with image and be assigned as a Union journalist or Confederate journalist.
2. Student will write a brief paragraph about something they could have witnessed, been a part of, or that is breaking news to the nation; write a caption for the image; and a headline for the paper. Remember that the stories were typically written as propaganda for Union or Confederate soldiers and were usually not neutral in nature.
3. The class will share their works and describe the intent of each headline and story. 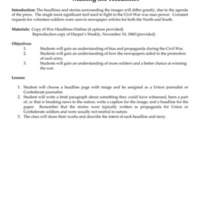