Two Union Veteran Medals in case. These star-shaped medals are inscribed with "Grand Army of the Republic, 1861-Veteran-1866". The medal hangs from a ribbon showing the Union flag and a blue bar, one of which features an eagle.

The engraving on this medal consists of Union imagery and many symbols. The front shows the goddess of liberty flanked by a soldier and a sailor clasping hands, representing loyalty. In the middle two children receive charitable reassurance from the soldiers. On the sides are a National Flag and an Eagle and a bundle of rods (fasco) representing the power of the Union. Each point on the star is engraved with a symbol of the branches of the military: A bugle for the infantry, cannons for the artillery men, a musket for the Marines, sabers for the cavalry, and an anchor for the Navy.

The back side of the medal is decorated with more symbols of the Union victory, including a laurel branch, the National Shield, and twenty-four Corps Badges. There are as many stars as the states comprising the Union.

Grand Army of the Republic Museum and Library, “The Grand Army Badge,” http://garmuslib.org/badge.htm.

This collection is courtesy of Tommy Gonzalez. We would like to thank him for the generosity he has shown the museum.

All photographs are courtesy of Georgene Richaud. Georgene, thank you for your contribution!

All rights to the images are held by Tommy Gonzalez. This image is posted for non-profit educational purposes, excluding printed publication. For permission to reproduce images and/or for copyright information, contact The Williamson Museum, 716 S. Austin Ave, Georgetown, TX 78626. 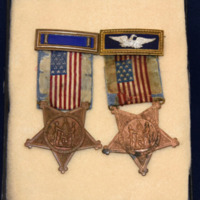 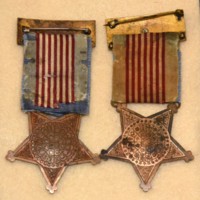