In this activity students will create a hospital flag and learn about the medical practices of this time period.

The student will gain a better understanding of the medical practices and technologies of the Civil War and of the significant contributions of women in the war, in particular Clara Barton.

Introduction: During The Civil War, field hospitals became necessary and were set up close in proximity to the battle fields. A way of designating this was a battle-free zone, medics would raise a yellow flag with a large green “H” marked for the hospital. Women, for the first time, entered onto battle fields as field nurses who would tend to wounded soldiers.

1. Student will trace out the large “H” stencil on green felt and cut out.
2. Glue “H” on yellow felt sheet- landscape direction.
3. Staple the hospital flag onto the dowel rod at the top.
4. Research more medical practices and the role of women in the Civil War. Learn of the changes Clara Barton implemented for first aide on the battle field. What symbol do we now have as a result of Clara Barton? 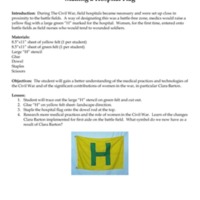