In this activity students will gain insight into battle strategy and the incredible loss of life the country faced during the Civil War.

The student will learn about military battle strategy and the tools used during this time period, including horses, guns and cannons. Through this reenactment, the students will gain an understanding of the horrific casualties in our country during this time.

Making your own battle horse:
1. Divide the class into 2 groups- North and South.
2. Before battle, each soldier must make his own horse on which he/she may ride into battle.
3. Layer two sheets of white paper. Draw an outline of a horse head. Cut out and color both sides.
4. Staple all edges of the horse head except around the neck and stuff with filler.
5. Insert horse head onto the PVC Pipe and tape closed the neck area onto the pipe.
6. Prepare for battle on horseback!
Battle:
1. Research a battle and the formations held using your research library.
2. Research the generals who lead each regimen of soldiers and designate roles; some will need to be casualties of war.
3. Head to your school yard and find an area that has high points and low points.
4. Move in formation according to the general’s orders on your horse.
5. Incorporate military strategies used as well as how far a rifle or cannon would reach once fired. 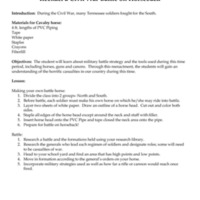