Robert R. Hyland, Pvt., was born February 12, 1842, in Burleson County, Texas. His father, Joseph Hyland, fought at the Battle of San Jacinto in the Texas Revolution.
At age 19, Hyland joined Company C on December 9, 1861, in Round Rock, Texas. He was captured at Camp Pratt, Louisiana, on November 20, 1863, and was paroled on December 21, 1863.
He married Margaret Cluck, the sister of Company C members Joseph, John and R. J. Cluck, on February 1, 1866, in Williamson County, Texas. Robert served as a 2nd Lieutenant in the Texas Rangers in 1871. He was an attorney and served as the Postmaster for Round Rock from 1897 to his death. He died on July 28, 1911, and is buried in the Round Rock Cemetery in Williamson County, Texas.

In these photographs Civil War veteran Robert Hyland is wearing a derby hat and standing next to a postal service carriage in front of the post office building. The other individuals are not identified.

All rights to the images are held by the respective holding institution. This image is posted for non-profit educational purposes, excluding printed publication. For permission to reproduce images and/or for copyright information, contact The Williamson Museum, 716 S. Austin Ave, Georgetown, TX 78626. 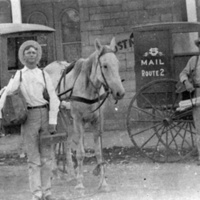 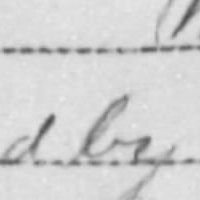 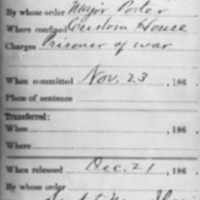